By katrinaJuly 6, 2014Improv
No Comments

Yup. I’ve found my true love (artistically speaking, that is). The Harold!!! During our iO longform intensive in April, Kristy Webb, Anthony Camillo and I looked at each other and said, “Hey – want to form a Harold team?” And thus, Cage-Free Humans was born. Our show, Organic Free-Range Improv happens every third Saturday at the Miami Dance Studio in Wynwood. We’re the first dedicated Harold team in Miami, but hope not to be the only one for long. 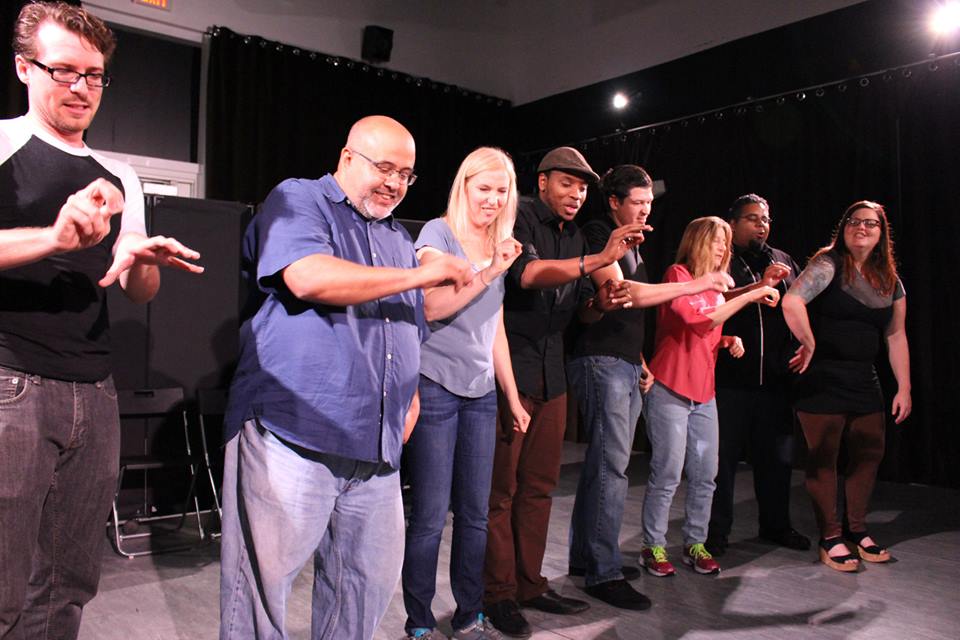 A whole bunch of realizations have been coming to me as I dig deeper into the Harold. I LOVED my drama class in high school taught by Tom Eggertsen, or Egg, as we called him. But when I moved on to theater classes at San Francisco State, something was missing. It just wasn’t as much fun and didn’t feel as creative. I’ve taken years of theater and acting for the camera classes. And while I  always found them rewarding, I very rarely left feeling exhilarated like I had after Egg’s classes at Acalanes High. Well, the iO intensive and now Cage-Free Humans rehearsals and shows leave me feeling that way. It finally dawned on me. We did a ton of improv in Egg’s classes! But I didn’t put two and two together for over 20 years! Improv just wasn’t even on my radar. I didn’t know it was a THING. I thought it was just an exercise for actors. Somehow Will Forte, who was a year ahead of me figured it out and went on to study at the Groundlings before joining the cast of SNL. Me? My head was firmly planted in the sand.

Funny thing is, I grew up on comedy. My mom would let me stay up on Saturday nights with my older sisters (they are 8 and 10 years older) to watch Saturday Night Live starting from the first season in 1975. I was 4. Steve Martin’s “A Wild and Crazy Guy” was on heavy rotation in our house. We watched Carol Burnett religiously. My mom said we used to watch Fernwood 2 Night as well. I don’t remember that, but watching it now, it explains a lot:

Somehow I always found my way back to improv. I took an improv for actors class from the hilarious Elena Maria Garcia in, oh around 1995. Again, loved it more than anything else. Again, didn’t know you could do it outside an acting class and didn’t do it again for over ten years. In the meantime, I tried to make a go of acting in Miami in the 90s. I was able to land a few commercials (psychic network, infinity dress sort of stuff) and then a gig as Melanie Griffiths’ stand-in in Two Much. The crew was super sweet and gave me a day role in the film, making me SAG eligible. Talk about luck. But there just wasn’t much going on here. My boyfriend said I should go out to LA, but I knew that if I went our relationship would most likely not survive and I had finally found the ONE. We’ve been together 20 years now. My bet has definitely paid off. But I did let go of acting for a good long time.

That boyfriend became my husband and he encouraged me to act again. He knew I loved it and could see that I was getting fidgety. So I jumped back in. Again, I’ve been pretty lucky. I started booking right away and there is much more going on now in Miami than in the 90s. And then one day I saw an audition for an improv theater that happened to be across the street from our business. Yup. Hadn’t noticed it. I auditioned and joined the troupe at Just The Funny. I started to get a taste of what I had loved all those years ago. I also realized you could do improv for improv’s sake! What a concept.

I would come home from rehearsals all pumped up and had a really great time there for two years. And then I let myself get pulled away by acting again. I booked a lead role in an indie sitcom and shot daily for two months, which was great. But, instead of returning to improv when I was done, I returned to acting classes. I think I have a ‘legitimate’ acting bias buried somewhere deep in my psyche, like improv is just for fun. Acting is the REAL thing. Acting is the art.

It wasn’t until Just The Funny brought iO to town for a week-long Harold intensive that I realized I could combine the two. While we had done longform at Just The Funny, it was usually Armando-style (still murky on that as well – I may need an intensive). Some of the JTF cast members headed up to Chicago for a Harold intensive at iO, and had started doing more longform, but this was just as I was leaving, so I missed it. I had heard of the Harold, but didn’t 100% get it. I joined the intensive on a whim. I’ll admit it. I didn’t know who Charna Halpern was despite having grown up watching and loving all of her students. David Christopher from JTF said she was coming down to teach  and it was a really big deal and that I should take the intensive. So I did. Oh. My. Gosh. Hallelujah. I am home.

So many people signed up in Miami, that we were able to bring in three teachers, Charna, Lindsay Hailey and Tara DeFranscisco. We were split into three groups and I had the GREAT fortune of spending an entire week with Tara. She is truly a beautiful person inside and out. And she’s an artist, through and through. She has a way of identifying and drawing out truth in such a clear way. She’s like a laser. One false utterance, and she’s right there with just the right note to set you back on the path to your truth. We learned so much so quickly. I don’t know how she did it. But she made it all make sense. And she did it with such love. I will forever be grateful.

We also got to spend a full day with Charna which was inspirational as well. She’s a power-house and is uncompromising in her approach to the artform that is improv. Improv is serious shit, y’all. I hadn’t fully grasped that. I get it now.

So now here we are, the first full Harold team in Miami. Through another stroke of luck, Kristy Webb, who had just returned to Miami after a full tenure at UCB New York back when I was leaving JTF had also signed up for the intensive and was in my group, who we dubbed the TaraDactyls. She KNOWS the Harold. She gets the Harold. And she has an amazing mind for comedy. Yeah. She’s coaching us. HOW FRICKIN LUCKY AM I? Add Anthony Camillo of Improv Rising, Carlos Rivera of Comedy School Dropouts, Lisa Leyenda, Eric Valdes of Impromedy, Jacob Centeno, Shannon Chamberlain, Sean Morin, and our newest member Joshua JB and you’ve got Cage-Free Humans. My amazing husband gave us a room at Rex Art to rehearse in and we perform monthly in Wynwood. Yeah. I’m happy.

And the Harold is taking off in Miami! Just The Funny hosts a monthly Harold night with the groups from the iO intensive as well. Performers come in from all over the state to perform, just like they did for the intensive. So there are TWO opportunities per month for folks to experience the Harold in Miami and hopefully there will be many more than that soon. Wheeeeee!